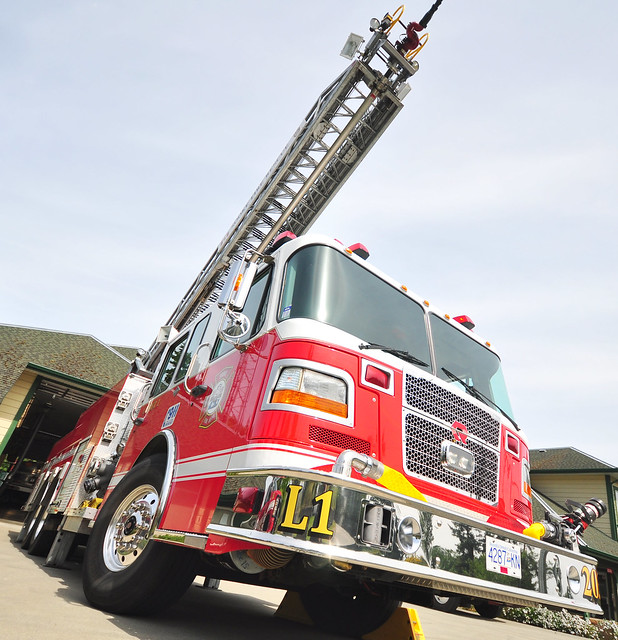 You’ve seen it before in the Sooke Mirror as a toy, perhaps you’ve even seen its chrome shining through the glass at the Sooke Fire Hall as you pass by.

Hang on. Wait. It’s not a car. This is a firetruck.

Yes, this Rosenbauer Cobra ladder firetruck is no hot rod, but it is still, undoubtedly, a very special vehicle of the Sooke community, and indeed a powerhouse for the Sooke Fire Department.

Assembled piece by piece by Rosenbauer in Lyons, South Dakota, the Cobra became the flagship of the firetruck fleet when it arrived to Sooke brand-new in 2006.

It also took firefighters to new heights, thanks to its four-section ladder capable of extending up to 109 feet. It can also be operated from a pedestal or by wireless remote control, so yeah, pretty cool.

But the ladder is just one of the Cobra’s party tricks; the truck is also a massive pumper, capable of gushing out 1,500 gallons of water per minute on its own, and up to 2,500 gallons if connected to a fire hydrant. Add a 1,000 gallon per minute hose to the ladder, and this truly becomes a firefighting machine.

Four stabilizers also deploy out the side of the truck for added safety to the ladder, giving it a width of up to 16 feet, which can be a bit tricky sometimes on narrow roads.

Not that it’s afraid of tight spaces. The Cobra’s cab-over design (meaning the passenger cab sits over the engine and transmission) allows for a tighter turning radius, which, despite its titanic proportions, is impressive.

Still, it’s no sedan, so special care is needed when behind the wheel, noted Sooke Fire Chief Steven Sorensen.

“It’s not too bad to drive, but you gotta realize there’s a lot hanging out the back, so when you’re making a turn, you have to be really careful,” he said.

What’s it got under the “hood”? Buried deep in the chassis lies a Caterpillar straight-six cylinder turbo-diesel engine with an output of around 400 horsepower and well over 1,000 lb.-ft. of torque, all of which is hooked up to an Alison automatic transmission.

It’s no road-burning stallion, but it’s one tough workhorse.

“It’s kind of underpowered, but that’s kind of a good thing, because you really don’t want something like this going all that fast,” Sorensen said, pointing out that the engine does triple duty as it not only powers the truck, but the pumps and all the hydraulics for the ladder and stabilizers.

Capable of seating  six fully-geared firefighters, the interior takes on the layout of a spaceship cockpit, with Tonka-toy sized buttons and radio switches up and around the driver and centre console, which also includes a back-up camera.

There’s also air-conditioning, but that’s where the creature-comforts kind of stop. All seats, except the driver, feature oxygen tanks (or airpacks) that can be bolted onto firefighters’ backs on the go, and there are storage pockets and bins just about everywhere for equipment such as flashlights, tarps, cutting tools, ropes, spare bottles, thermo-imaging cameras, and first aid kits.

To make sure all those lights keep on flashing and every piece of equipment keeps going for a long time, six heavy-duty batteries lie under the cab, which also includes an on-board hydraulic power generator.

With an expected service lifespan of 30 years, the big Cobra has plenty of life in it, ready to take a bite out of any fire emergency that’s thrown at it.

“It’s a pretty amazing piece of equipment, we definitely want to hang on to it for a long time,” Sorensen said.

Students reach out to Hannah Day